Zuidas aims to be an attractive location for bicycle users. The Bicycle Parking Fund was created to help achieve that, and has already helped build three first-class underground bike facilities here in Zuidas. An initiative of the Zuidas Amsterdam Development Office in cooperation with BYCS and Hello Zuidas, this fund is part of the A to Zuidas platform providing an incentive for building managers to create good parking facilities for cyclists. We talked with Maryse de Oliveira Martins of the Zuidas Amsterdam Development Office, Marinke Nell, facility manager at CBRE, and Max Lugtenborg, project manager at BYCS. 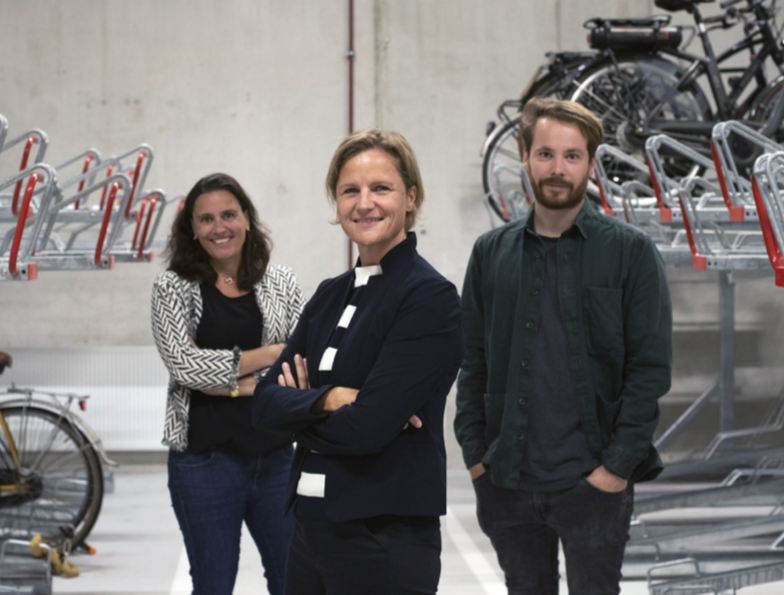 Applications to the Bicycle Parking Fund are assessed on the way the allocated funds would be invested. That could be to convert car parking spaces into bicycle spaces, for instance, or to redesign an existing bike facility more efficiently in order to accommodate additional bikes. Maryse explains, ‘The investment should be linked to a bicycle policy that promotes bike use. The Fund can contribute to that investment, covering up to 50% of implementation costs for the work, with a maximum of €25,000 per application. For 2020 we have a sum total of €65,000 in funding for this purpose, which is available to building owners, managers and tenants who want to invest in bike facilities to accommodate more bikes.’ MORE

Since the Fund was set up in 2018, it has supported the expansion of facilities in three buildings. All three projects were prompted in part by requests from building tenants themselves, indicating that the number of people cycling to work is on the rise. ‘Within our portfolio we’ve received funding for NoMA House, Infinity and WTC Amsterdam’, Marinke says. ‘NoMA House and WTC Amsterdam are finished now and Infinity is currently being roofed, after which it also will be finished. At the WTC Amsterdam an additional 25 spaces were created beneath Tower H as part of an overall upgrade of the bike facility, which now has 391 spaces altogether. NoMA House has capacity for 76 bikes plus eight parking spaces for scooters. And at Infinity we were able to create 219 extra spaces. Because bicycle standards were different at the time that building was built, there was very little space in the old facility. Now there’s plenty!’

Zuidas is an attractive area for businesses and increasingly for people to live as well. Good transit links and access are part of the reason why, says Max. ‘Bikes play an important role in that, especially now that the spread of electric bikes is enabling commuters to cover longer distances by bike. We want to promote the provision of good facilities for bike users at buildings in Zuidas. That’s even more crucial in these times that we all have to practice social distancing. In some parts of Zuidas it’s tough to find a spot, and when you’ve got too many bikes in a public space, it tends to look chaotic. On top of that, it tends to obstruct pedestrian and bike escape routes. The Bicycle Parking Fund is helping to solve those kinds of problems.’ 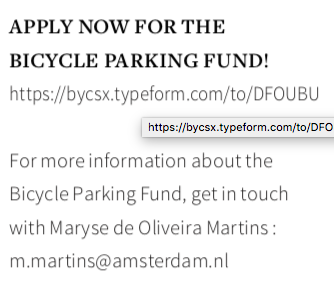