At 26, Ilse Paulis is a professional rower who in 2016 won gold in Rio de Janeiro. These days, she’s training hard again for the next year’s Olympic Games in Tokyo. Besides working daily to achieve her athletic goals, Ilse is also studying medicine at the VU in Amsterdam. Athletic, smart and funny, this star talent is also unusually down-to-earth. Hello Zuidas sat down with Ilse to talk about her life as an athlete and student and to hear what she thinks of Zuidas, where she combines her life in sports and science.

How did you ﬁrst get into rowing? Did you grow up with it, or was there some external spark?

‘My father began rowing as an adult. One day, when I was around nine, I came along and was instantly hooked. I started off training several times a week, which became more and more serious over time, but it wasn’t until later on that I realized I could shoot for the Olympics. That was about five years ago. I was taken on board at the national team where I was supported to reach my full potential as an athlete. Funnily enough, the “rowing bug” has also infected my sisters. They are 19 and 22 now, and well on their way to the top.’ 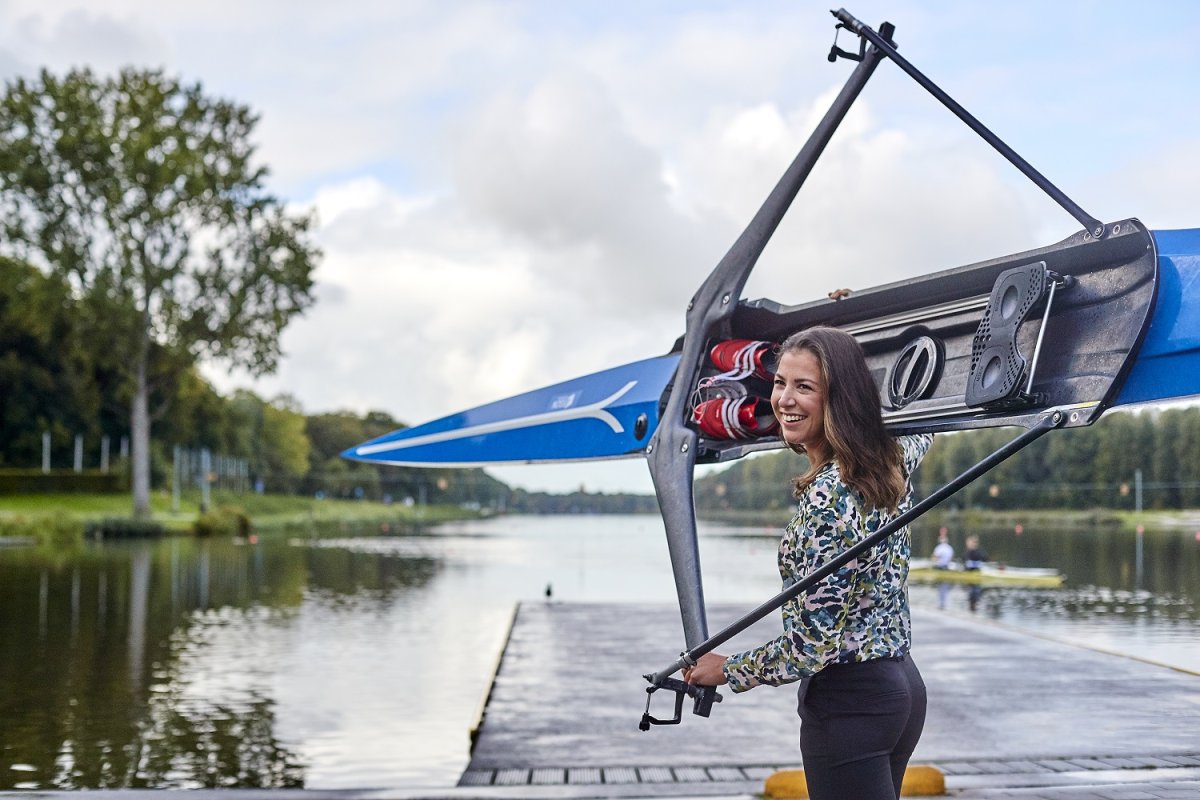 How do you combine studying with playing a professional sport?

‘I enrolled in the medical programme at VU in 2012. At the moment I’m there less, but I always stay involved. As a professional athlete, you think in cycles of four years, from one Olympic Games to the next. I’m not the kind of athlete who can focus exclusively on sports for those whole four years – I need challenges on other fronts as well, and studying offers me that challenge alongside rowing. Elite sports are mostly self-centred, but with medicine I think I can make a difference for other people. The medical programme isn’t easy and takes real perseverance. Rowing is a sport where commitment and resilience can get you far, comparable to the culture the Zuidas is known for too, in which working hard pays off . Currently, I’m doing a research placement for my degree at the VUmc. It gives me a sense of relativation, as well as develop essential scientific skills I will need in the future.’

Rowing is a sport where commitment and resilience can get you far, comparable to the culture the Zuidas is known for too, in which working hard pays off.

How often are you at the Bosbaan, and how much at VU? To what extent do you feel tied to Zuidas?

‘It’s easier to count the days I’m not at the Bosbaan than those I am, but fortunately for me it’s all close together. In terms of scheduling, VU and my coach give me lots of flexibility, for which I are immensely grateful. I have been able to combine my two passions, which have made me a stronger and more focused athlete. Though I’m not as familiar with the business district, Zuidas is basically where I live my life: I study here and row here, and in the mornings I cycle from my house in the Amstelkwartier to the Bosbaan. In that sense, Zuidas is a home base for me, although I’m more on the outside looking in than in the thick of things.’

Rowing is seldom a solitary activity, and you’ve achieved your biggest triumphs with your rowing partner. To what extent do you attribute your success to your own ambition and athletic ability – and how instrumental has teamwork been?

‘I think that rowing a double sculls, with two people in the boat, is the purest form of teamwork. You’re so reliant and dependent on one another, and that makes harmonizing even more essential. Plus, you need two rowers in top form who are willing to sacrifice for each other. Within the national training group, the top two rowers get the seats. A year ahead of the Rio Games, it wasn’t exactly smooth sailing yet. Maaike and I finished 14th in the World Championships, whereas we’d been hoping to qualify for the Olympics. But ultimately we found a way to not only be our best selves, but also draw the best out of each other. From successful colleagues in rowing, we have maintained a close friendship. From good colleagues we went on to be actual friends after the Games. There’s a kind of growth process you go through together.'

Maaike has left rowing now. How is it to row with a different partner? Is there normally an obvious new candidate, or do you have to go out and find one?

“I really value the time spent rowing with Maaike. However, my goals are now set on Tokyo and I’m fortunate to be paired up with another talented rower. Marieke Keijser was already among the best in 2016 and has made great strides since. I believe we are the perfect example that sometimes you need to invest in a relationship, but that won’t prevent you from being successful together. We haven’t missed a single championship podium in the three years we have competed together and I firmly believe we have even more to show.”

What are your plans for the future?

‘Good question – there are so many new challenges and experiences ahead. My long-term plan is to become a doctor; that’s what I think of as ultimately being my real career. After the Olympics I also want to invest more in my relationships with family and friends. I’m looking forward to the time when I can start giving back after all the years I asked so much of them.’ 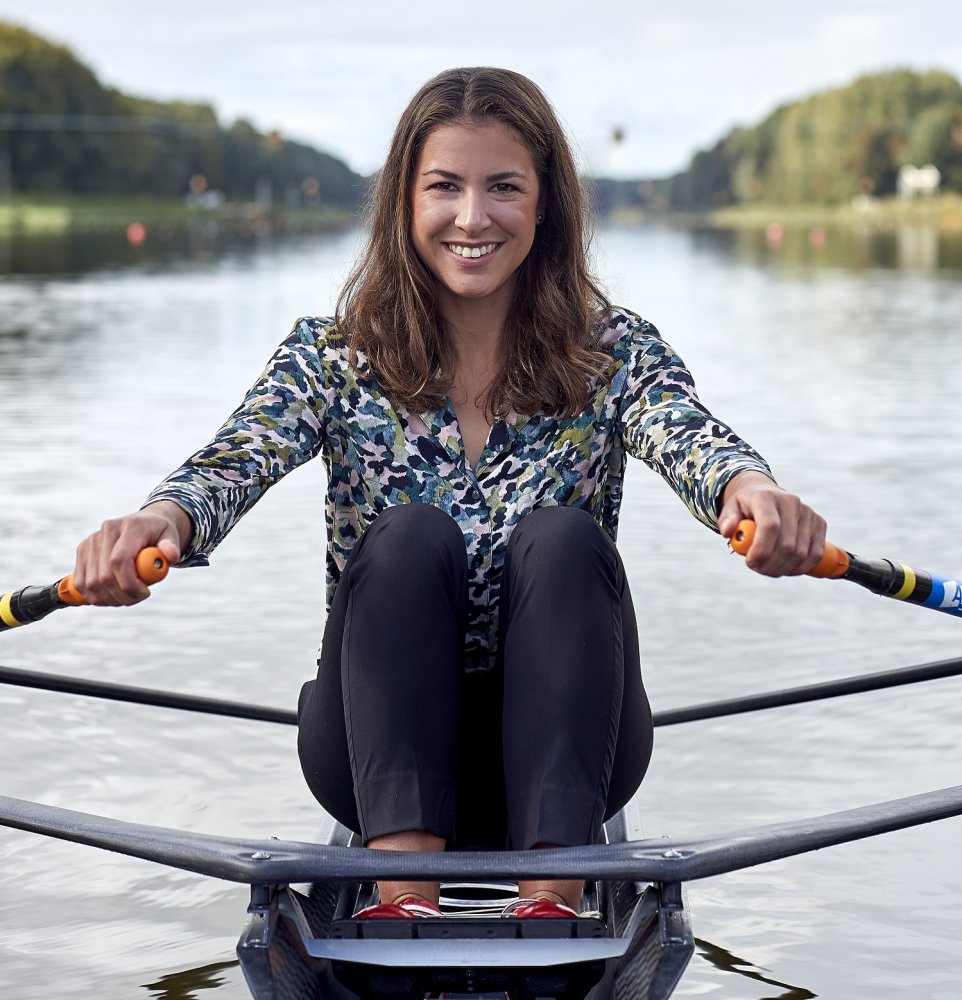 Have you ever considered completely changing careers, and if so, why?

‘Occasionally, yes. Professional sports are incredibly demanding, also because sometimes it’s just not fun – but you have that with any job. There are times you wonder why you started in the first place. In the end, you do it for the races, for the times you peak.’

Have you had to make any major sacrifices?

‘Absolutely. I’ve missed quite a few celebrations of friends and family, and my life hasn’t left much room for spontaneity. I can’t jet off somewhere for the weekend, because I’ve got to focus on something else. Plus, by the end of a training day I’m not much fun to hang out with, so that makes things tricky.’

Could you imagine life without rowing, or will you continue doing it for as long as possible?

‘When you’ve tasted what it’s like to row at the highest level, I think it would be hard to forget that feeling. So, recreational rowing…? I’m not sure I even have the capacity to do that. We’ll see.’